US Inflation Hits 2.7% In March 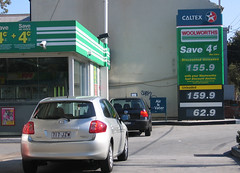 The rise in food and petrol prices pushed the annual rate of US inflation up from 2.1% in February to 2.7% in March. The customer price figures from the US Labor Department also showed the increase between February and March at 0.5%. Petrol and food prices together accounted for almost three quarters of the annual increase, leaving these to one side .

As in the rest of the world, fuel and food prices have risen sharply across the US. Petrol prices were up for the ninth month in a row, rising by 5.6% reflecting the firm climbs of oil prices in recent months. Food prices rose in February by 0.8%, the largest monthly increase since July 2008. Taking out food and energy costs the increase was just 1.2%.

Wages and salaries in the US are hardly growing, which limits the ability of vendors to raise prices. Rising oil and commodity prices are driving up the rate of price rises around the world. Figures also released on Friday showed that consumer prices in China rose by 5.6% in March, and by 2.7% in the European sector .

US Advised On Top Credit Rating