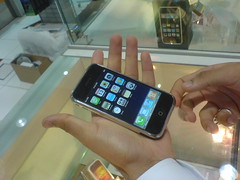 Apple’s latest earnings climbed past prospects as sales of its best-known iPhone and iPad products more than doubled. Net income was $7.31billion in the three months to 25 June, 125% higher than a year earlier and a record quarterly profit for the firm. Revenue was $28.6billion, also a quarterly record.

Apple sold more than 20 million iPhones in the quarter and 9.25 million iPads. Though, iPod sales continued to slip downhill by 20% to 7.54 million units.

The results alleviated worry about the supply of the iPad 2, partially because of parts supply pause caused by Japan’s tsunami and earthquake in March.

Apple chief financial officer, Peter Oppenheimer, said that they are extremely pleased with their performance and look forward to the fourth financial quarter of 2011, they expect revenue of about $25billion.

Oppenheimer also announced that Lion, the new version of the Mac OS X operating system, will go on sale from Wednesday. The Lion software mimics some of the features of the iPhone and iPad interface. Shares jumped 5.3% in extended after-hours trading to their highest for a year.